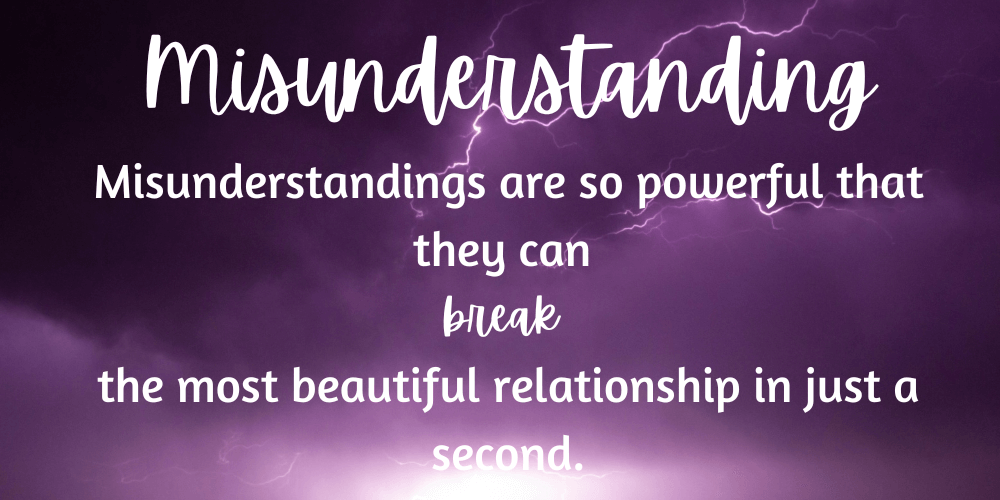 Misunderstandings have caused many a good fight and breakups in intimate relationships, friendships and employer/employee relationships.

There can be many root causes. I?m going to give a couple of examples here that might illicit thoughtful reflection.

A man and woman in relationship are in the store when an old plutonic friend of the woman?s approaches her. The woman is cognizant of her partner standing there but she has a chronic freeze response that arises in social settings and she can?t find a way to pause her conversation for a moment and introduce the two men. The woman?s partner is the jealous type and flies into a rage once they leave the store. He felt there was more to the old friendship than she was letting on and felt both fearful and humiliated.

The woman was still in her freeze response and the attack from her partner was too much for her brain to process in the moment. She would have liked to ease her partners discomfort but she needed a bit of time to integrate the surprise of running into an old acquaintance, their conversation and her partners contempt.

Her partner needed to know that he was her main man and there was nothing to worry about. It was an innocent conversation. The problem was that neither one of them were available for an adult conversation. The woman just simply could not talk and the man?s emotions rendered him useless to reason in that moment.

These are the kinds of knee-jerk reactions that can cause detrimental misunderstandings in relationships.

Where did the freeze start for the woman and where did the man?s distrust and feelings of contempt arise from? It can help to sit with a neutral person and break these things down. We can prevent these sorts of altercations if we can find the disconnect between our brain and body.

You might want to sign up for my newsletter under ?services? so you can be kept informed of my upcoming workshops or contact me for one on one sessions.